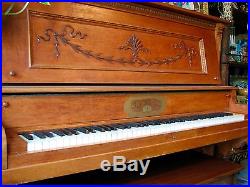 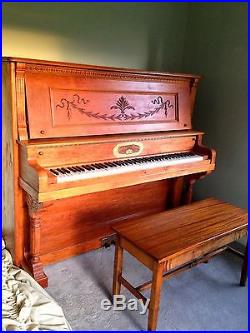 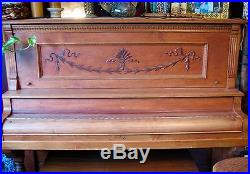 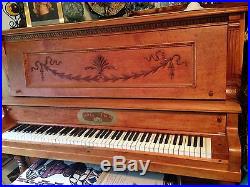 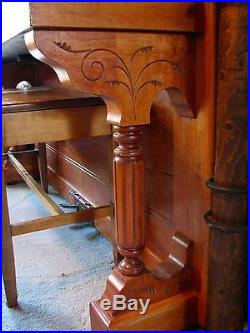 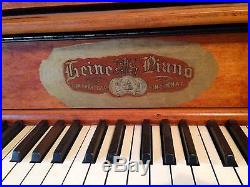 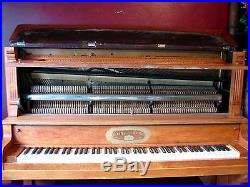 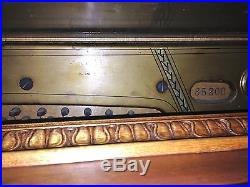 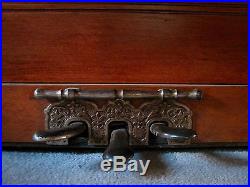 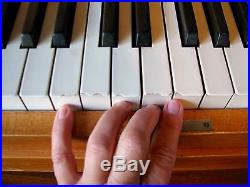 I have an antique, upright grand, Heine piano for sale. This is a beautiful and functional piece of furniture and history. Serial number is 35200, found on a metal plate inside the sound board. It has 88 keys, all playable, and in tune. The keys are all weighted wood, with the white keys being true’ivories’. Seventeen of the ivories have small chips on the front edge does not affect playing and have to look close to see. One photo shows the worst of them. It definately could use a good internal cleaning & professional tuning after being moved (which should be done on all pianos after being moved anyways), but it plays OK, having that’old piano’ quality and sound. A lower’F’ key (2 octaves below middle-C) does stick when played hard, and middle peddle doesn’t work. Both should be correctable by a professional tuner.. It shows dates from the 1800’s. From what I can come up with from the serial number and research I did, the age looks to be from the late 1800’s to around 1907. There is very worn lettering on a metal plate near the serial number. You can’t really read it in the photo, but it says. Emsley Piano Tuner Seattle. I googled that and found a newspaper clipping on the “Historical Society” site, in the Monroe Monitor (WA), from Friday June 22, 1928 pg 8. It has an ad for E. Here is a quote from an online company that restores antique pianos and sells them. The Heine Piano Company was established in San Francisco, California in about 1889. Some of their instruments were manufactured by the Krell Piano Company of Indiana. The firm built upright and baby grand pianos until about 1905 when they introduced player pianos into their product line. Pianos built by Heine are rare on the East Coast, indicating that they were not aggressively pushed outside of the West Coast region. Heine was out of business before the Great Depression. The house itself is over 100 years old, and the woman who lived here was in her 90’s when she died and did play the piano. The piano bench was filled with her old sheet music and music books (not in good condition). The oldest I can see is from 1904, with much of it being in the 1930’s-1940’s. The music is NOT included in the sale price. I would LOVE to keep this playable piece of history, but will be unable to take it with us when we move. We are located in East Tacoma, WA. Please contact if interested or have any questions. I have already had 3 scammers contact me. I WILL REPORT SCAMMERS/FRAUD! The item “Antique/Vintage Upright Grand Piano” is in sale since Thursday, February 15, 2018. This item is in the category “Musical Instruments & Gear\Pianos, Keyboards & Organs\Pianos\Upright Pianos”. The seller is “bjsbohemianheart” and is located in Tacoma, Washington. This item can’t be shipped, the buyer must pick up the item.

Pristine In and Out. The Yamaha U1 is one of the most desired pianos by music institutions around the world. In new like condition inside and out and features muffler for quiet discreet practice. (FLIGHTS OF STAIRS NOT INCLUDED). The …
Continue reading »